When my husband and I were in Yellowstone and the surrounding areas, we were frequently reminded that encountering grizzly bears was a real possibility and warned not to hike without bear spray.

I saw two bears from a distance but was unable to photograph them. These photos were captured by my friends, Susan and Ted, who live in Montana. 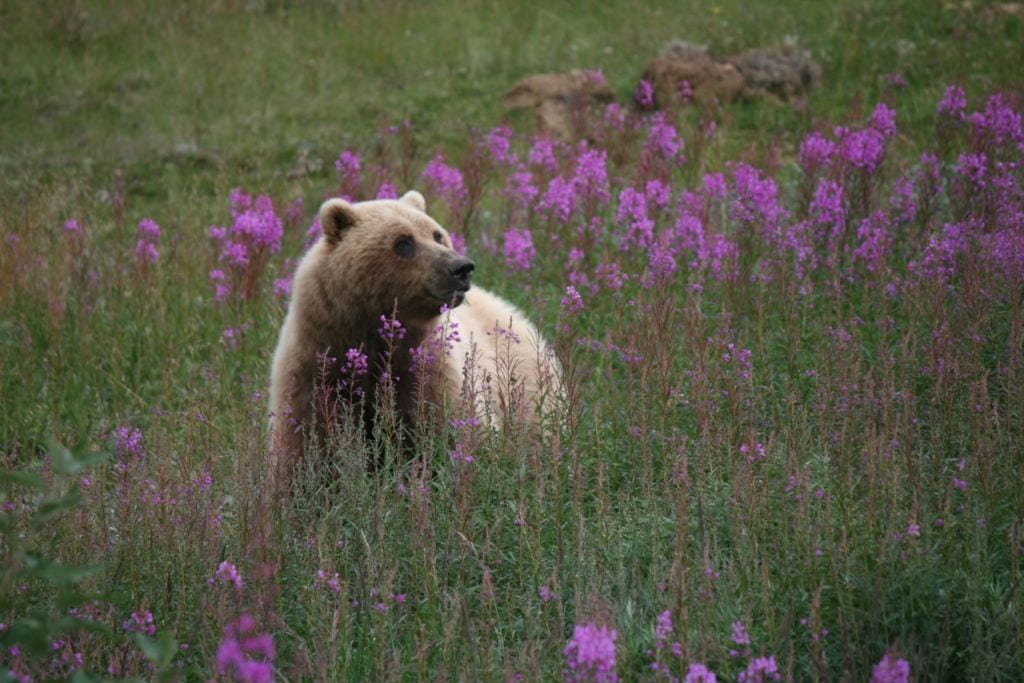 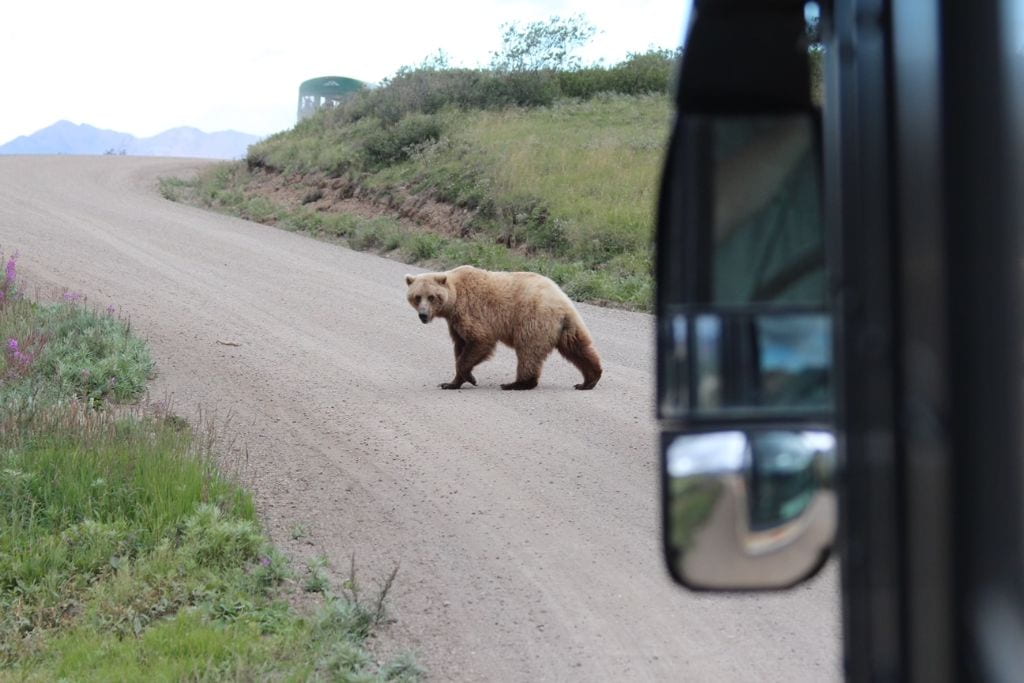 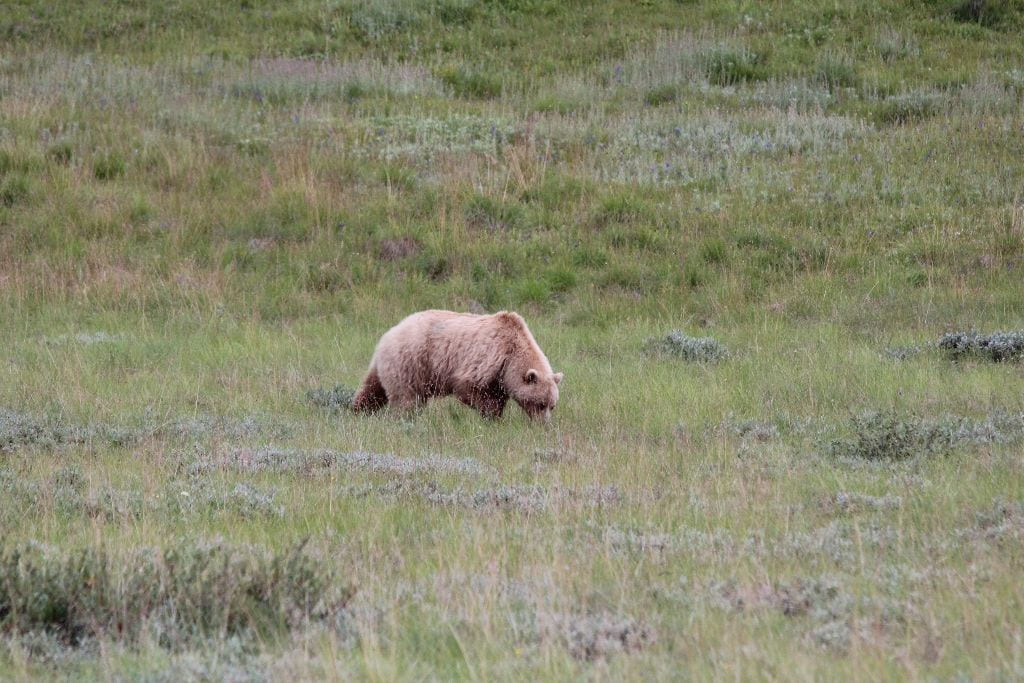 Felt as if I was on a bear hunt which reminded me of one of my favorite children ‘s books. This story is easily dramatized and it’s always fun to add sound effects using your body, common objects, or instruments. Use this book as an engaging way to teach positional words (under, over, and through) as well as descriptive words (long and wavy), and onomatopoeia (sound words). I have made a map of this story on a long sheet of bulletin board paper with prior classes to introduce map skills and to retell and sequence the events. Note: We were told to never run from a grizzly bear!

Finding buffalo in Yellowstone is almost certain, and I was anxious to see them. It is the only place in the United States where bison have lived continually, and they roam and migrate freely as they graze on grasses and other plants.

Bison were declared the national mammal of America in 2016. There are also European bison. 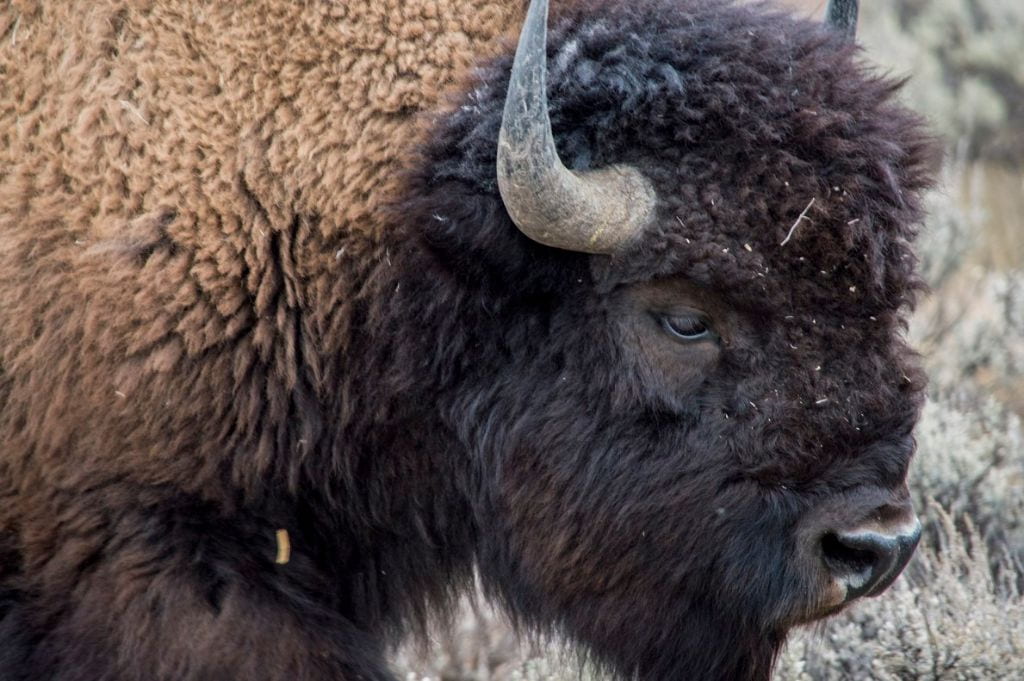 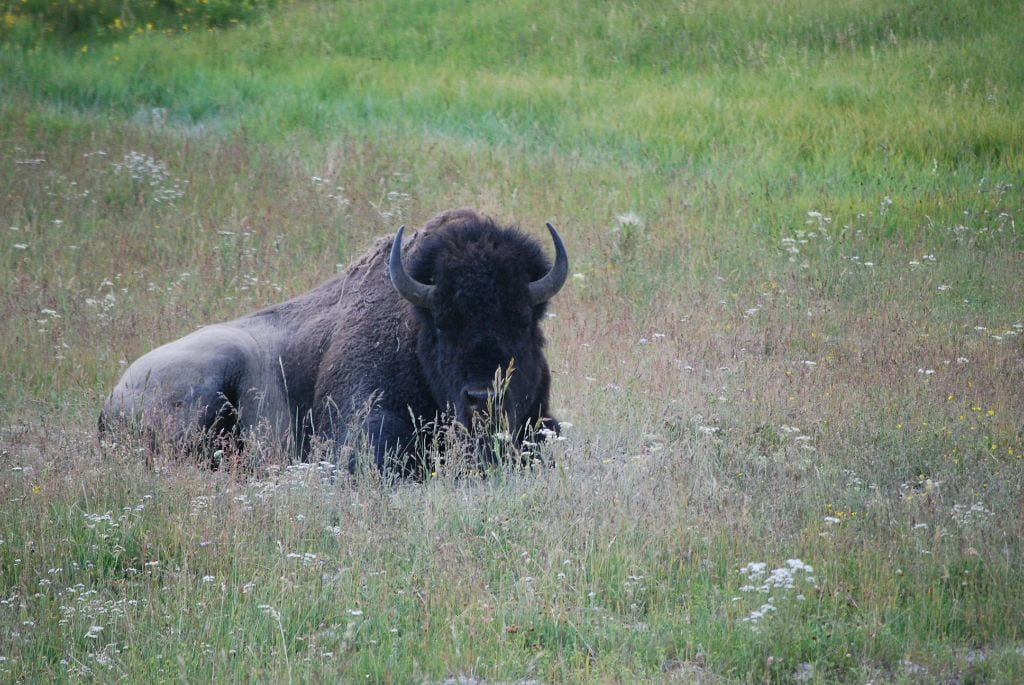 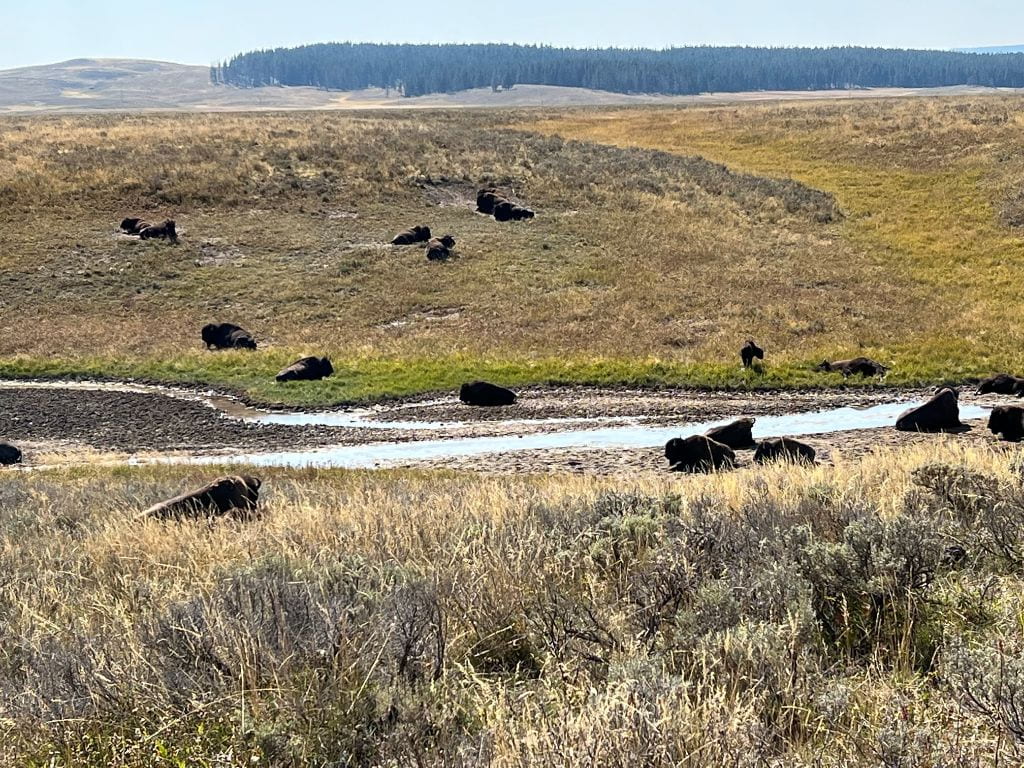 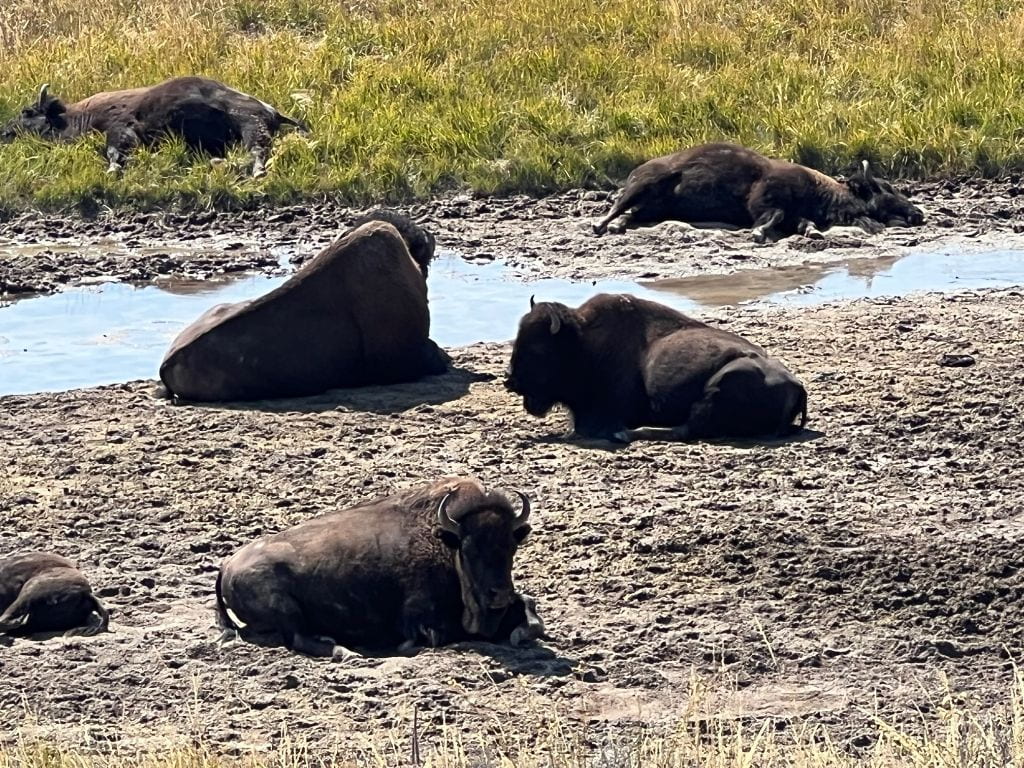 The history of the bison is a heartbreaking one. I’m grateful for conservation efforts that have saved the buffalo from extinction. Click here to view full screen.

A sweet story to add to your collection: 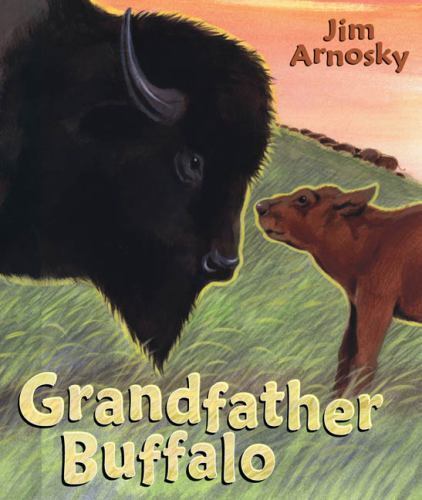 I found myself singing,
Oh give me a home where the buffalo roam,
Where the deer and the antelope play,

Note: The first two photos were taken by my friend, Susan.

The Continental Divide, which runs along the Rocky Mountains, separates watersheds in the contiguous 48 states of America that drain into the Pacific or Atlantic Oceans. The Great Divide stretches from Alaska to the tip of South America and runs through the states of Montana, Idaho, Wyoming, Colorado, and New Mexico. Click here for more information from National Geographic. 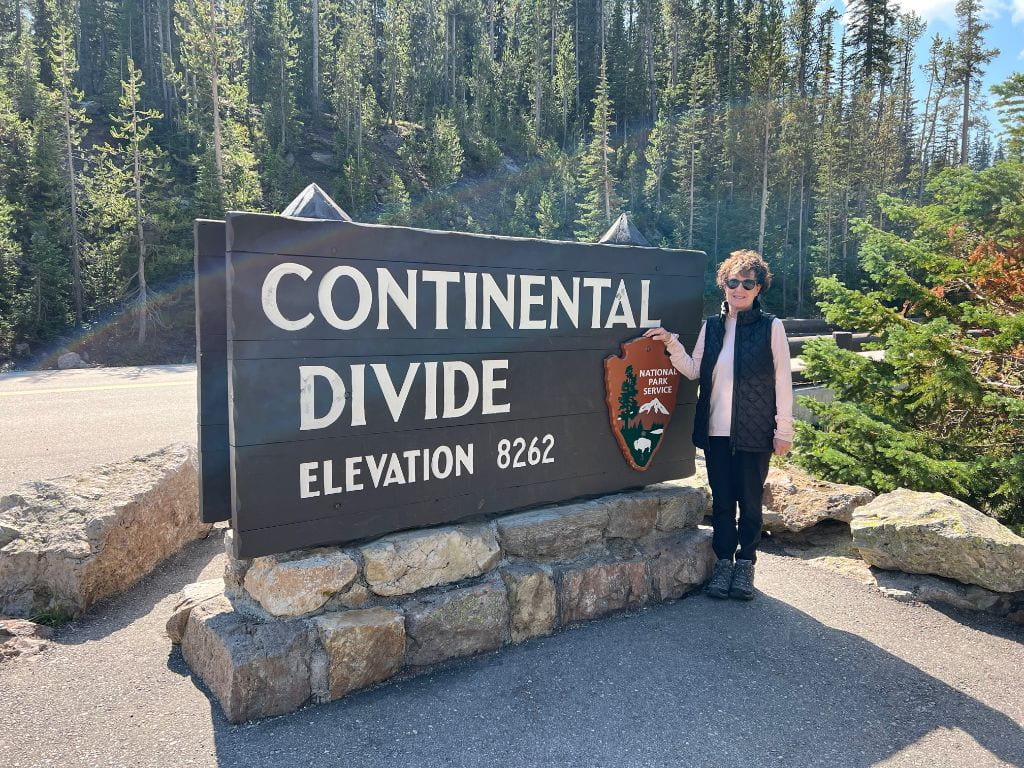 Click here for an additional video about worldwide divides.

Our original vacation plans were to travel from Livingston to Missoula and then onto Whitefish, Montana and Glacier National Park. However, the smoke from forest fires burning in several states prevented us from accomplishing our plans. The air quality was just too poor. 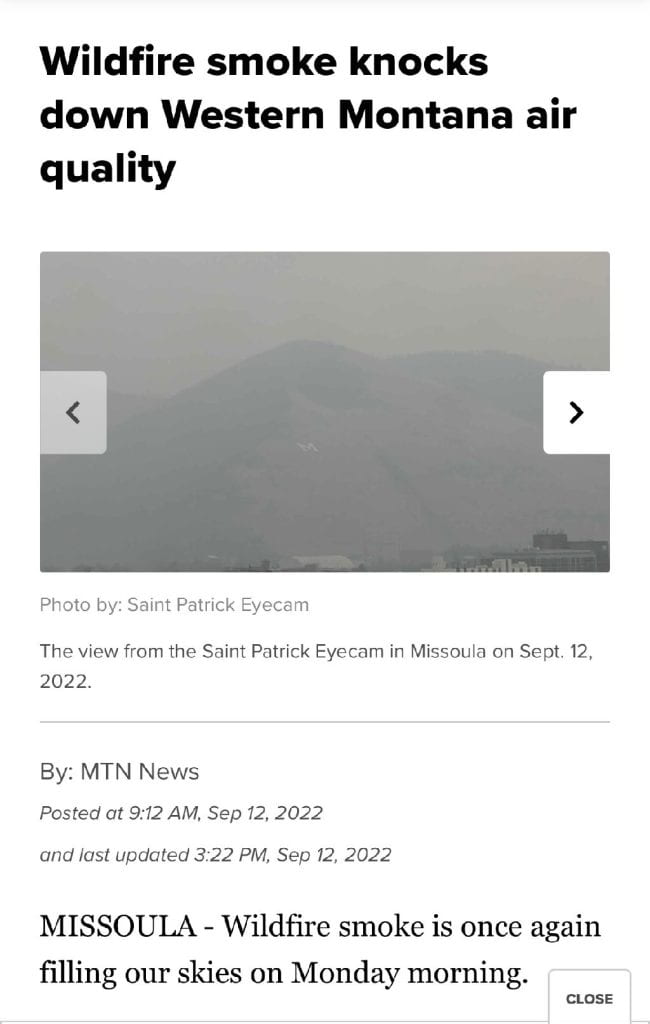 The debate on whether to extinguish forest fires, often caused by lightning strikes in Yellowstone National Park, was an interesting one. In the past, attempts were always made to put out fires in the park, but thoughts have changed on whether that is the healthiest choice for a thriving ecosystem. The National Park System permits lightning-ignited fires to burn in Yellowstone if they are not a threat to human life or property. Yellowstone’s fire season usually lasts from July through late September. 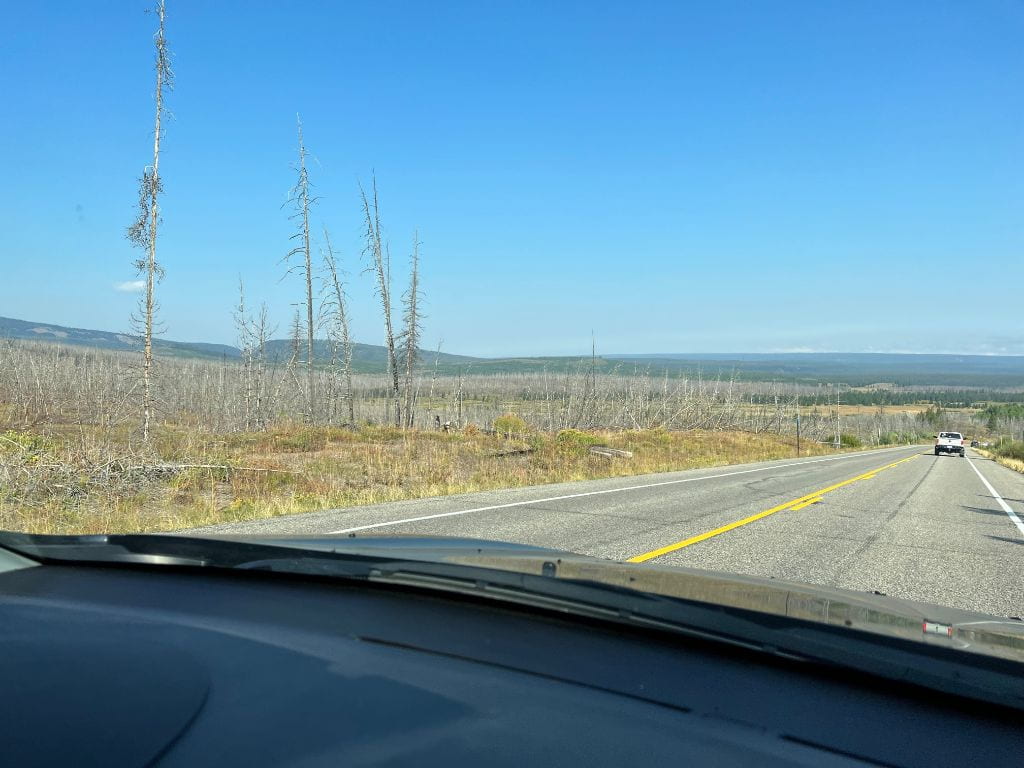 Lodgepole pines fill the forests of Yellowstone. The cones of these pines are tightly sealed with resin. As a result, the cones can’t open unless they’re exposed to very high temperatures, like that of a forest fire. The cones may be on the trees for years before there is enough heat to open them. Can you see the saplings in the photo below? Dead and burned trees are not removed because they provide food and shelter for animals and nutrients for the soil. These tall, straight pines were used to construct tipis by native people, hence the name lodgepole pine. 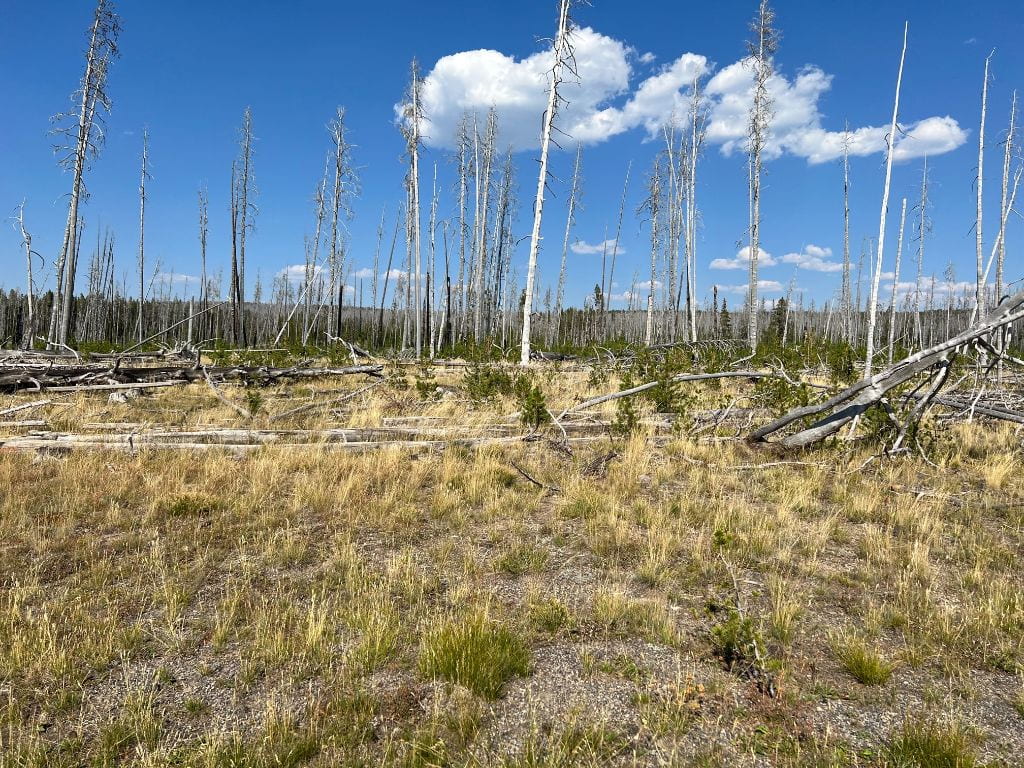 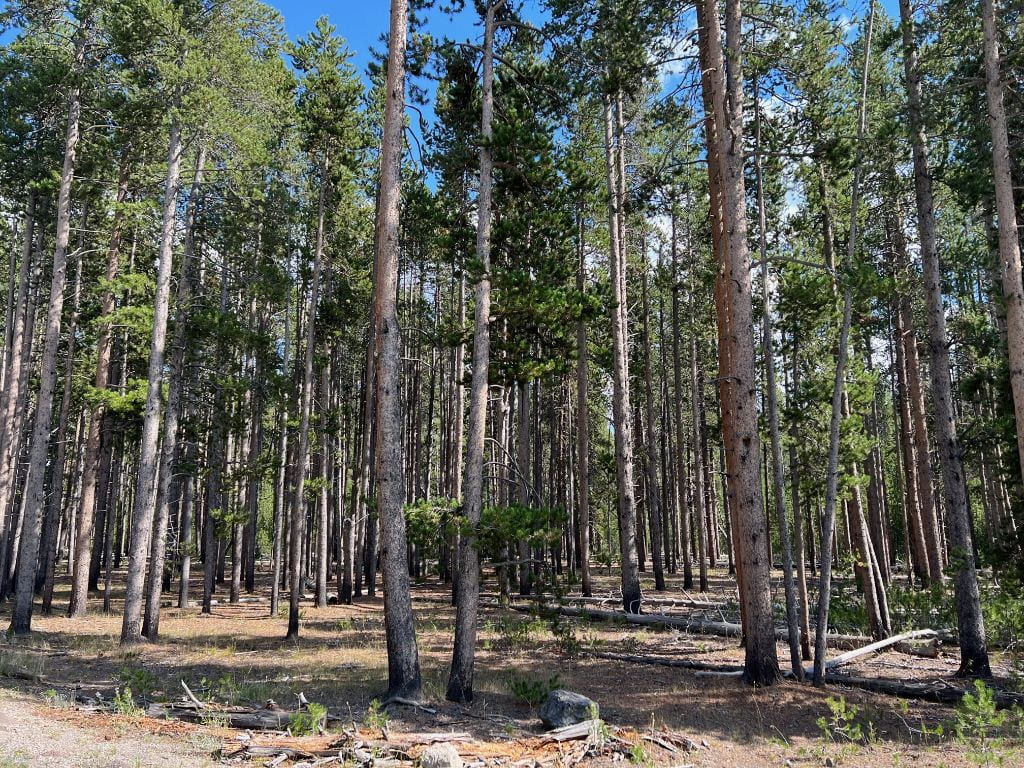 We were told by rangers that many large animals, like elk and moose, benefit from the open spaces created by the fires. By removing the forest overstory, fire also promotes habitat diversity.

There is a time for everything, and a season for every activity under the heavens. (Ecclesiastes 3:1)

Category: All About Mrs. Bright, Science | 2 Comments on Forest Fires

National Play Outside Day is celebrated on the first Saturday of every month. Turn off all technology, explore the great outdoors, and reconnect with nature! Shouldn’t we be outside every day?

When I went to the Chicago Botanic Garden, I saw this fun play area for children of all ages. Can you see the stream that meanders through the field in which children are invited to play? 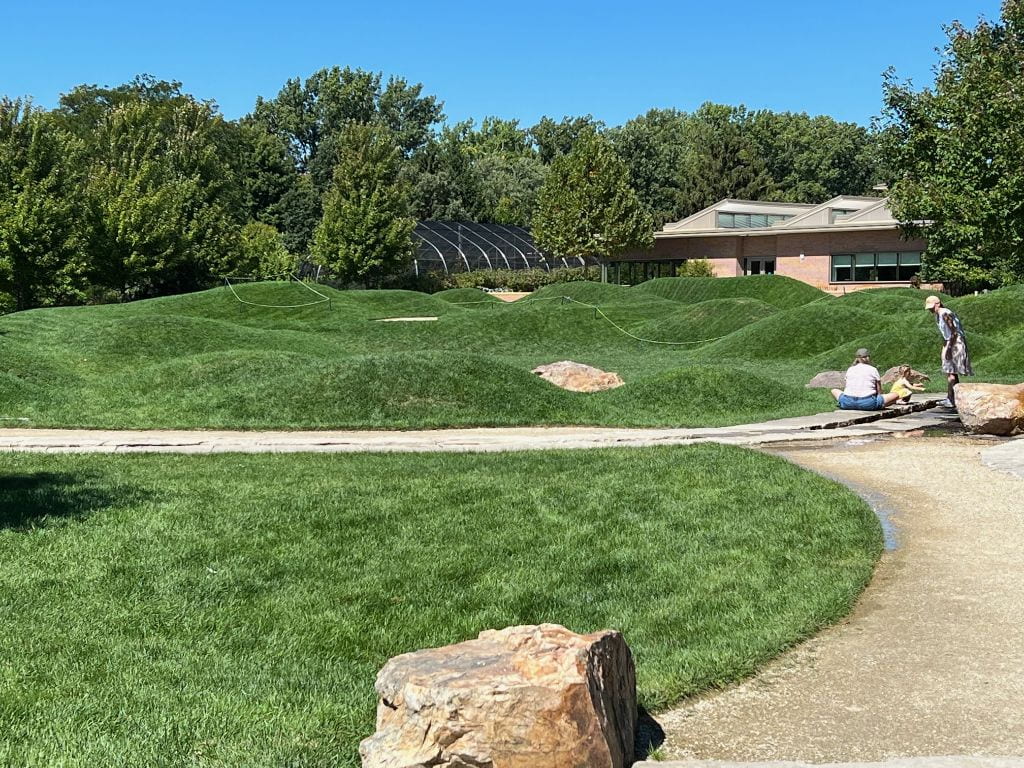 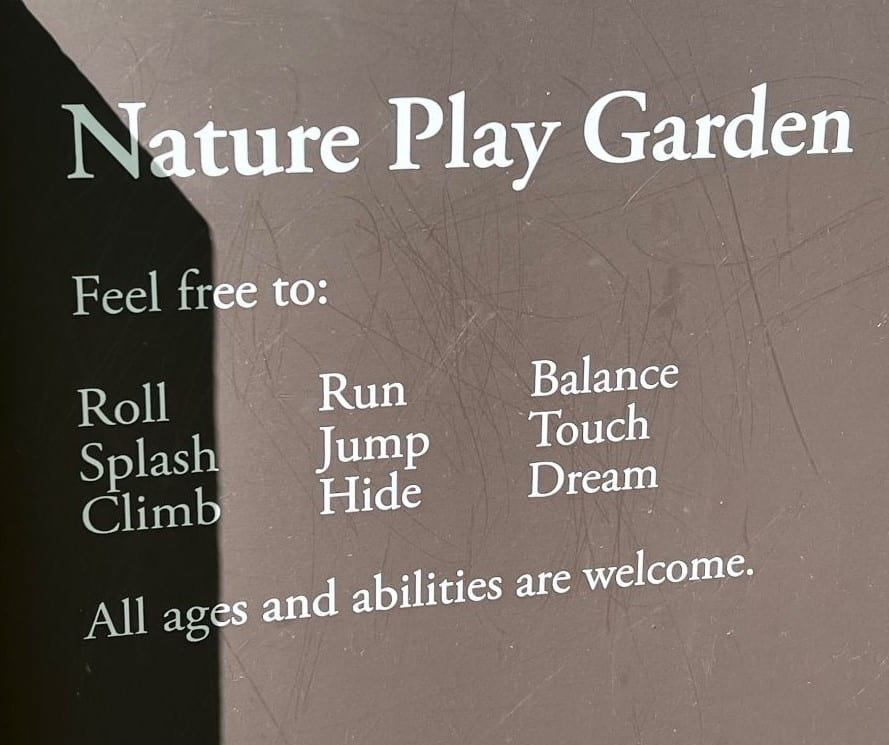 I discovered thistles growing in the fields of Wyoming and Montana. These plants are covered with prickly leaves and stems which protect them from herbivores, but thistles are still valuable to animal life. Pollinators extract nectar from their flowers, and birds eat the seeds and use the down for nests. I’ve always thought thistles were enticing, but ranchers and farmers think of them as troublesome weeds that are difficult to remove because of their prickles and stubborn root system. 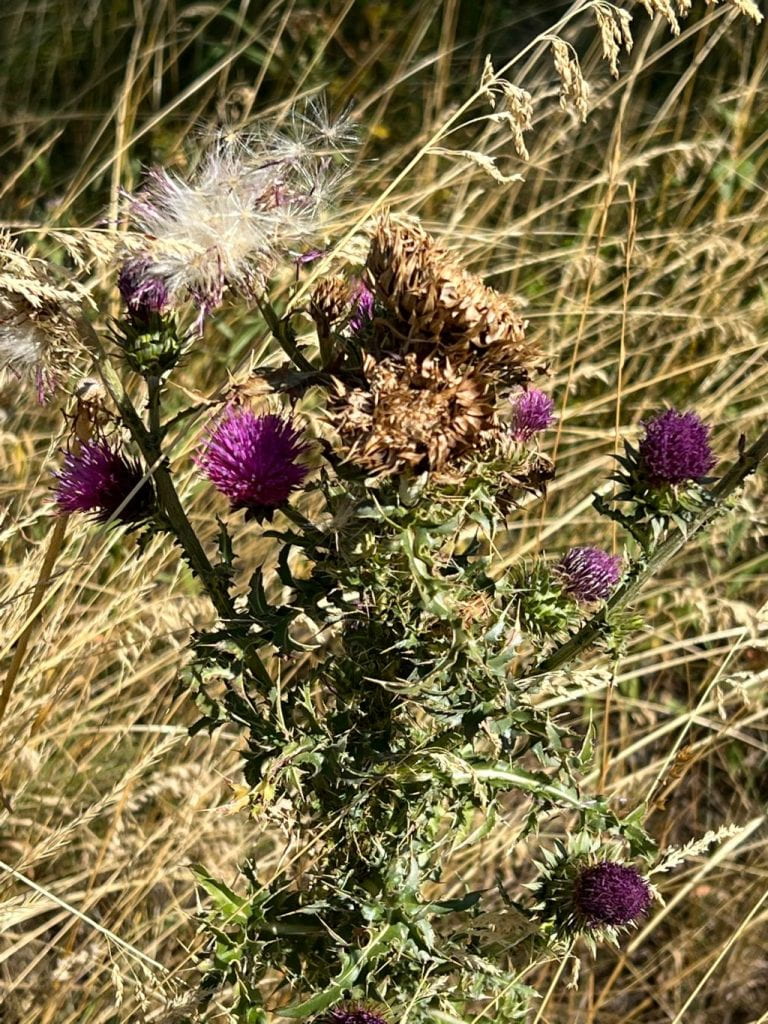 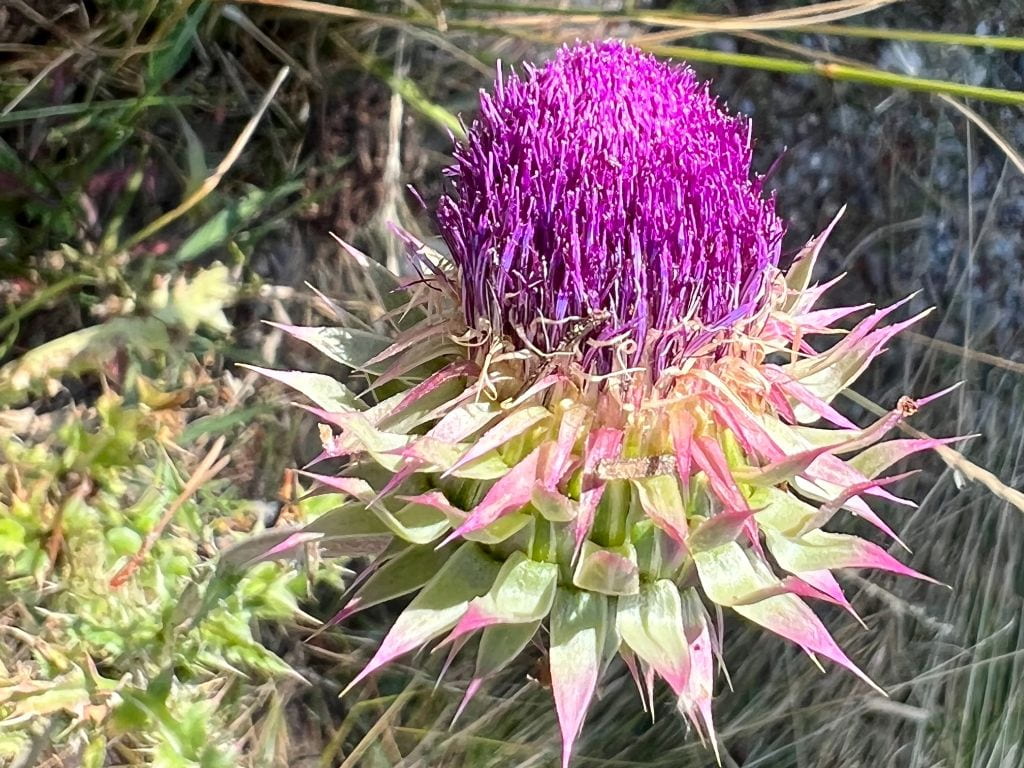 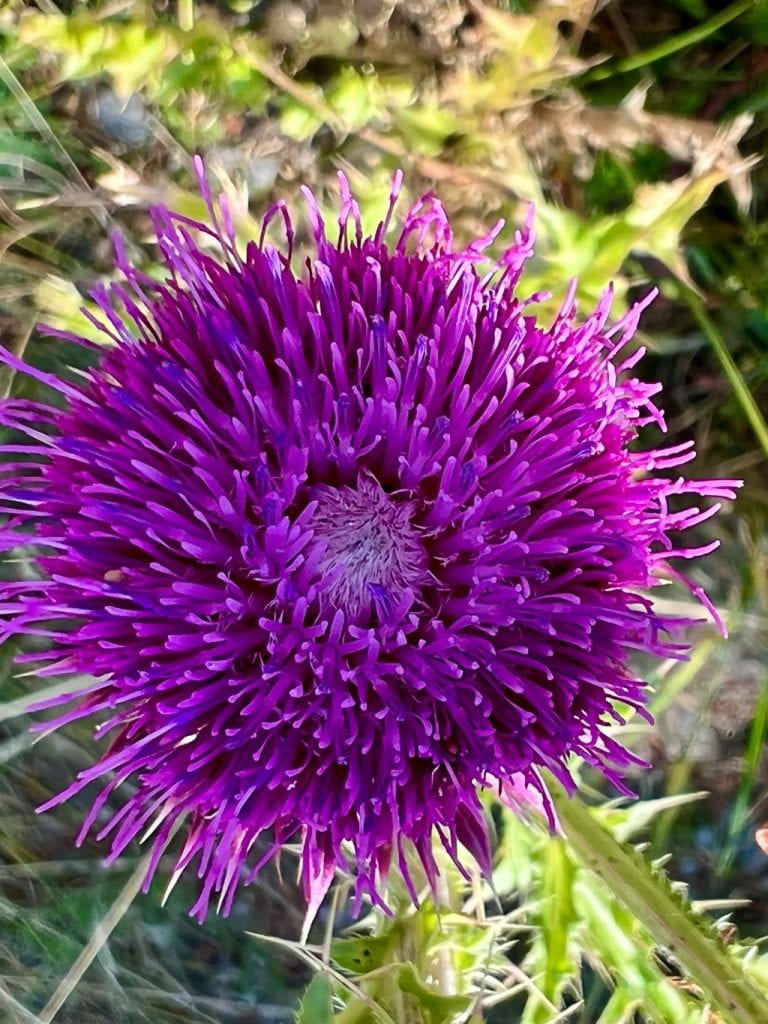 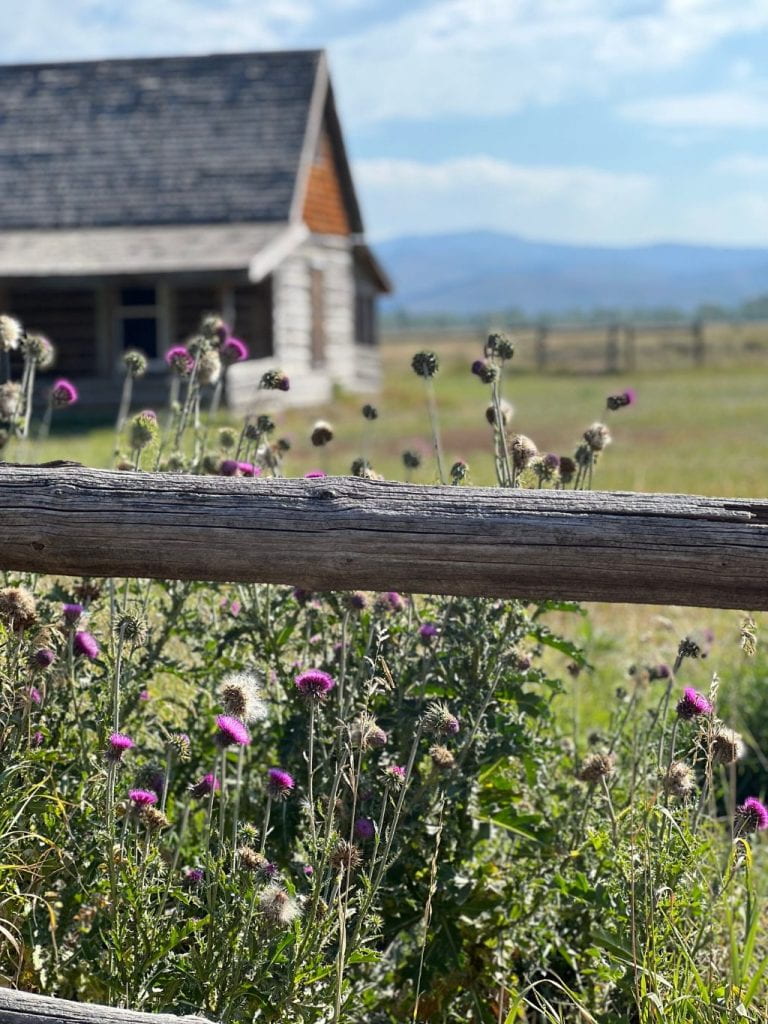 Thistles are the national symbol of Scotland. They are considered noble flowers. Click here to watch full screen.

On a recent trip to Montana and Wyoming, I saw magpies for the first time. They were everywhere and since I knew very little about this species, I did some research.

Magpies are about 18 inches long and are easily recognized by their black and white plumage. Wings and longs tails are iridescent green, blue, or purple. Magpies, related to crows, are omnivores and eat a varied diet. They are thought to be intelligent animals capable of complex thinking, A group pf magpies is called a parliament. Magpies mate for life and females lay about six eggs per clutch. Click here for additional information. 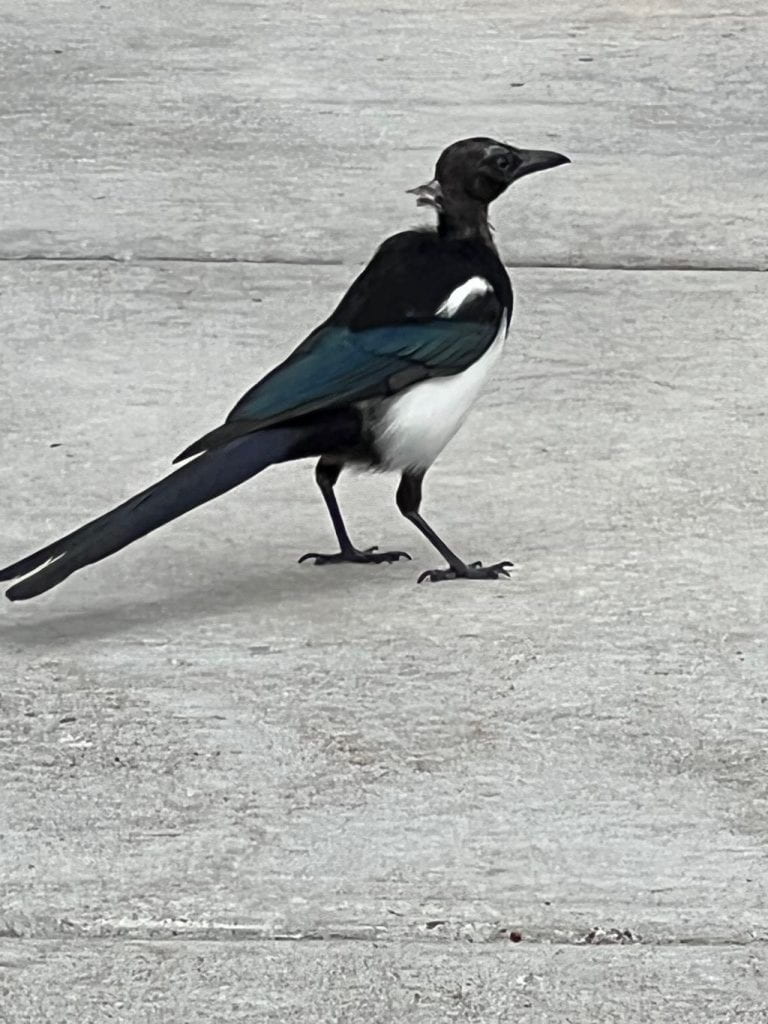 I grew up in New York and loved the white (paper) birch trees. I saw them again on a recent trip to Montana. Although there are 60 species of birch trees, paper birch trees, deciduous hardwoods, are easily identified by the peeling white bark. Brainstorm why the trunk may have black markings with your children or students. These black streaks are lenticels and help gases move between the air and tree. Birch trees grow quickly but are short-lived. They often have multiple trunks and prefer moist habitats. Native people used sheets of bark to cover canoes and wigwams. 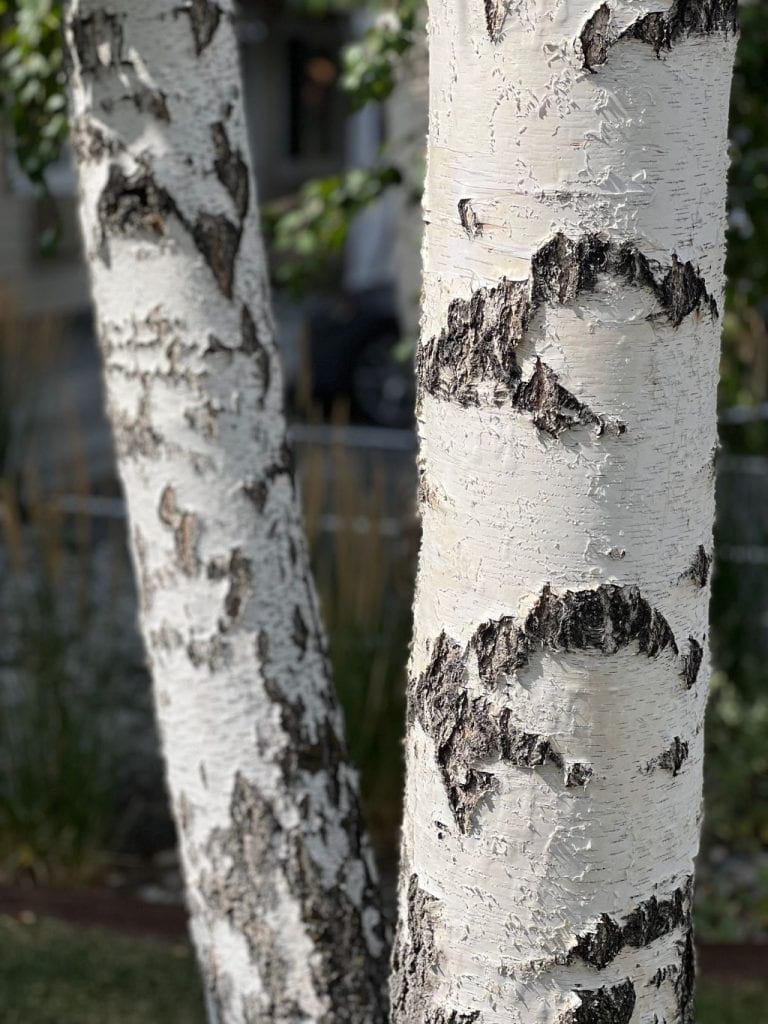 Leaves have double toothed margins and turn yellow each autumn. 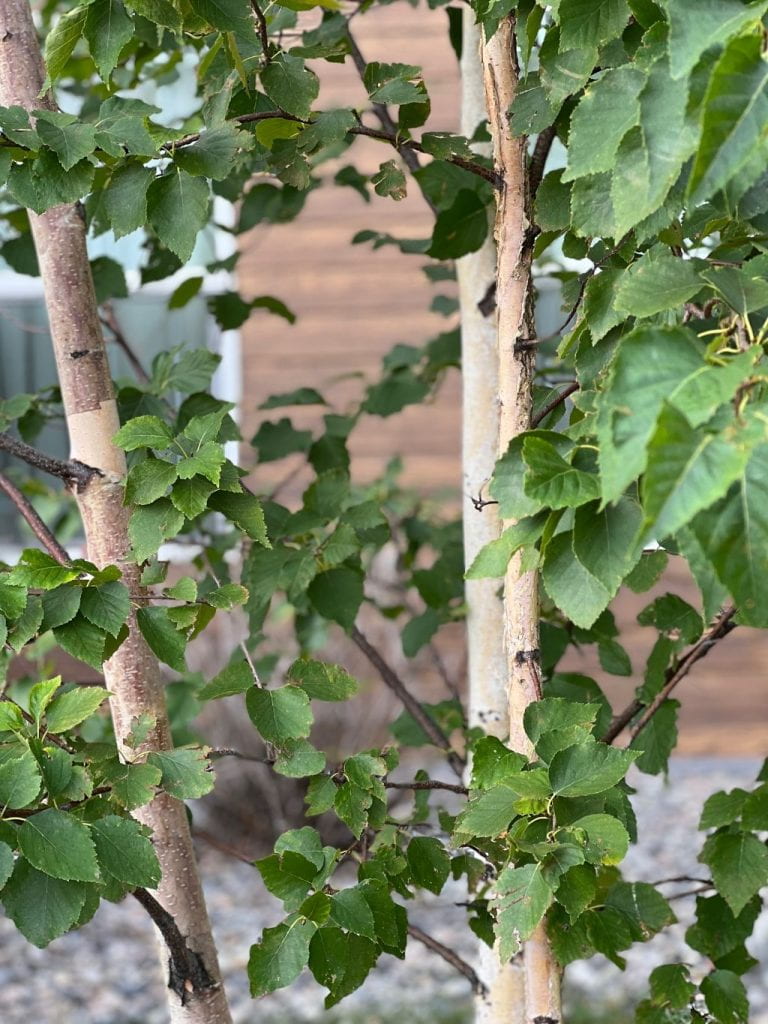 The small dry fruit grow in clusters on drooping catkins that turn brown as they mature. 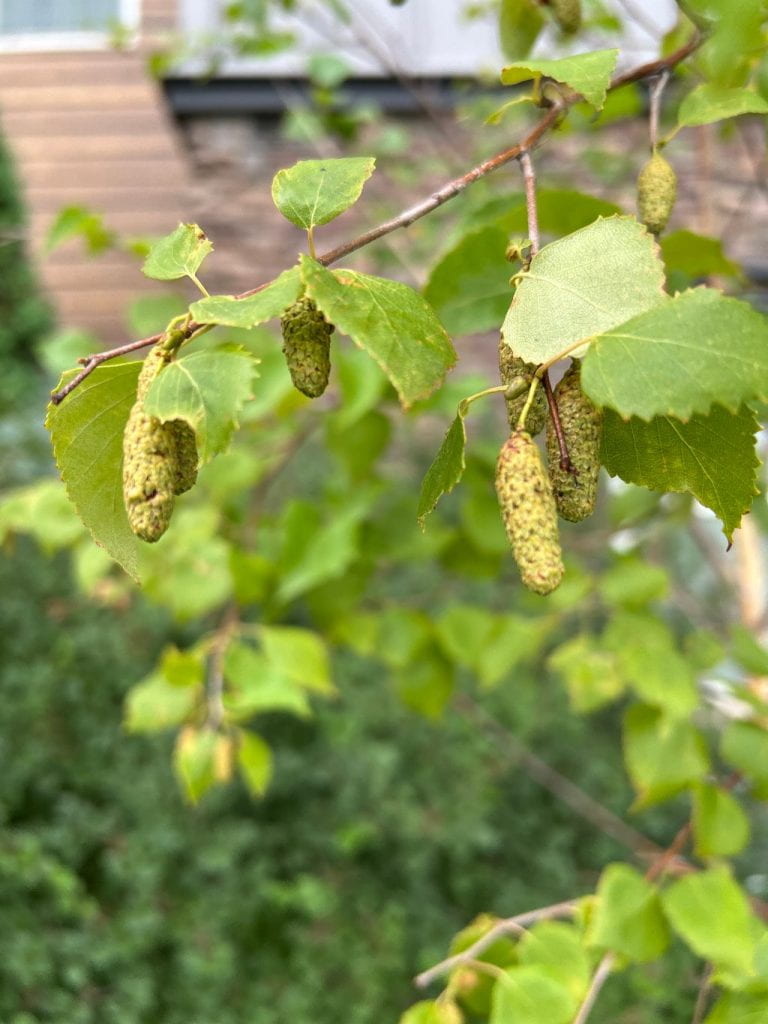 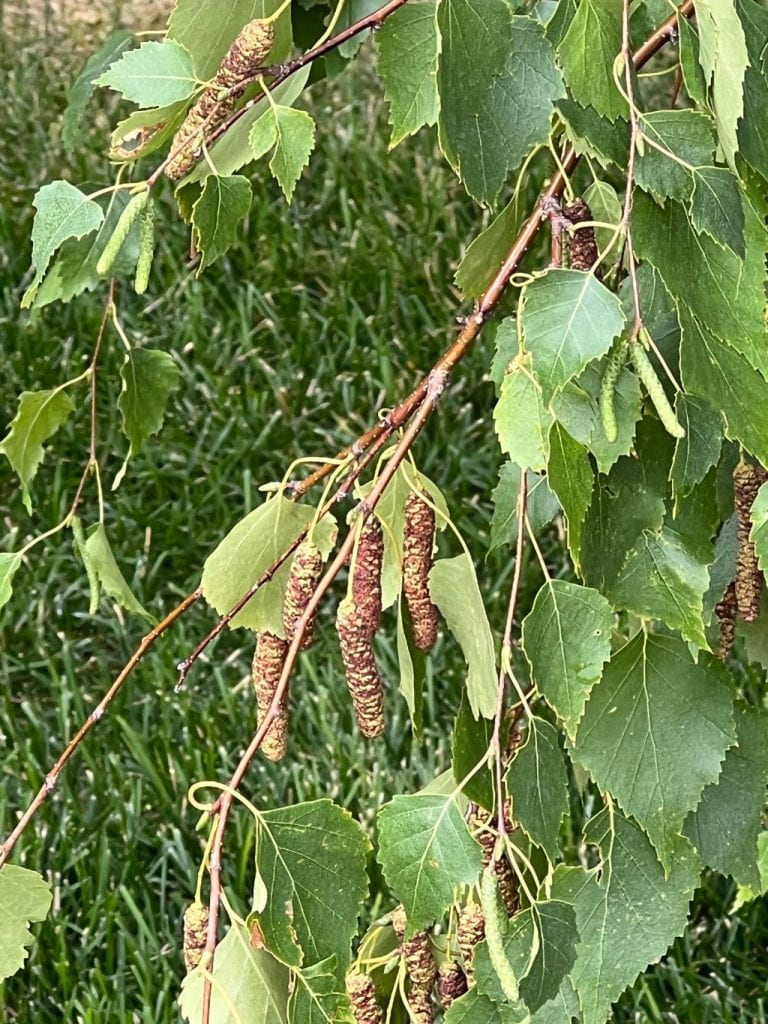 There are simple ways for students to create birch trees, like the ones below made by Mrs. Lilge’s PreK class. Place painter’s tape on your paper to form the outline of the birch trees. Press the edges down well. Older students may want to place some trees in the foreground and others in the background after drawing the horizon. Design trees of various widths by overlapping the tape. Remove the painter’s tape after blending paint across the paper and over the tape to create a sunset. Add the lenticels to complete the trees with a black marker or crayon. Note: Blend paint for the sunset with three colors, such as orange, yellow, and red, or blue, purple, and red. 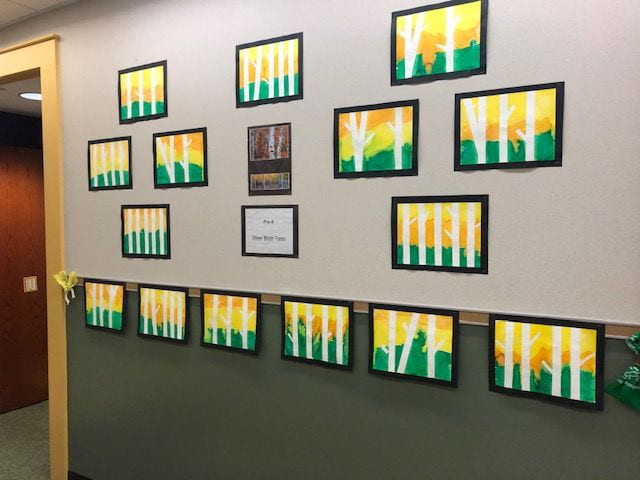 Why Is It Important to Spend Time Outdoors?

Designed by education experts and loved by all families.

I’ve previously featured Tinkergarten’s blog with my online community. I share their fundamental belief that spending time in nature is invaluable and life-changing for adults and children. The following report details research that supports this conviction.

Click here to go to the article with links to additional information.

Do You Know the Answer?

I discovered these holes in the leaves below when I returned home from vacation. I assume an insect made them, but I don’t know of any that leave a pattern like this. Also, do you notice how the leaf has turned red around each hole, almost as if it is bleeding? 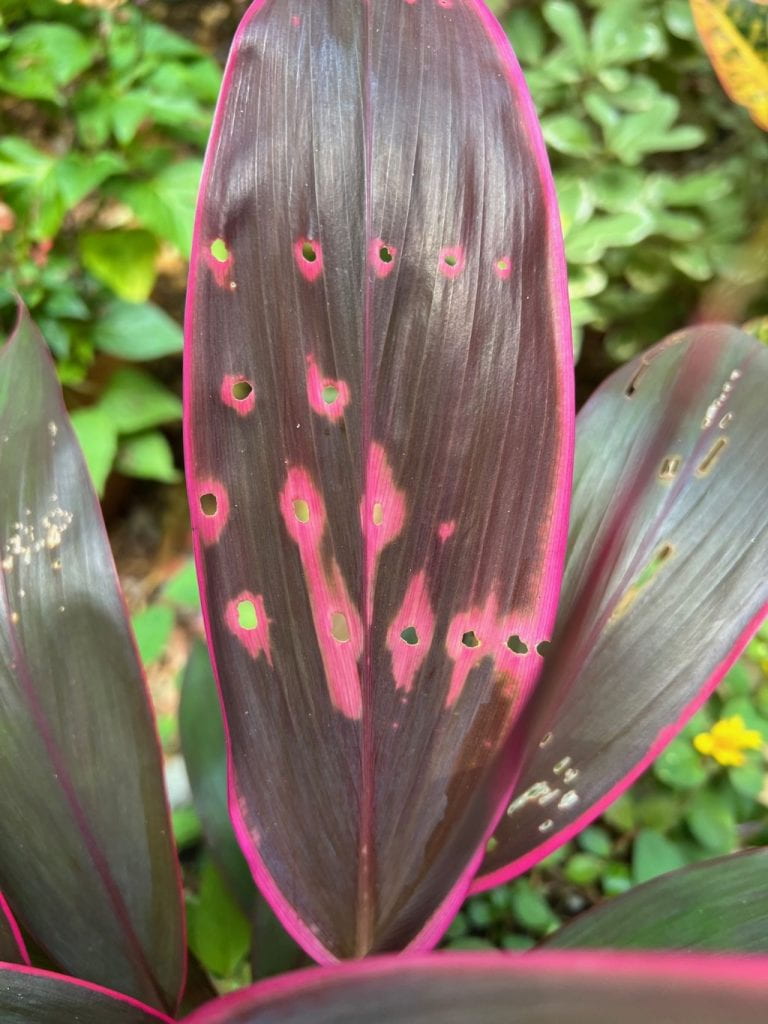 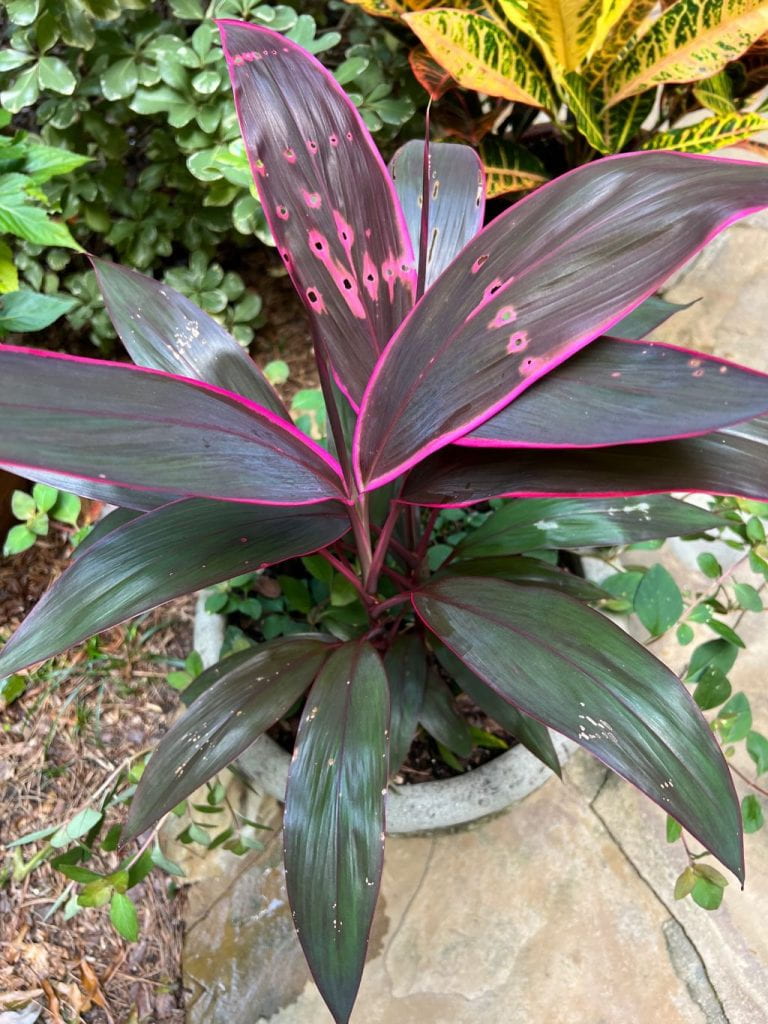 Maybe it was the very hungry caterpillar! Click here for Safeshare.