In reading, I have introduced the literary term perspective.  We practiced this concept by thinking of items for which someone or something else may be thankful.  Look at some of the examples below:

George said, “If I were a football player, I would be thankful for the touchdown zone, my football, my pads, my mouthpiece, my eyes, and my feet.”

Cailin stated, “If I were a horse, I would be thankful for hay, grass, water, trainers, riders, and friends.”

Makena said, “If I were a rock star, I would be thankful for music, microphones, the stage, my fans, my voice, and radios.”

Aaron wrote, “If I were Olly, my guinea pig, I would be thankful for hay, Aaron, water, a cage, bedding, fur, oxygen, and a lock.”

Hudson explained, “If I were a policeman, I would be thankful for my gun, my police car, my partner, my chief, and my computer.”

I have been so impressed with the mental math skills I have seen this year.  The students in my math group each wrote a target number on a turkey and then wrote equations which equaled the selected number. 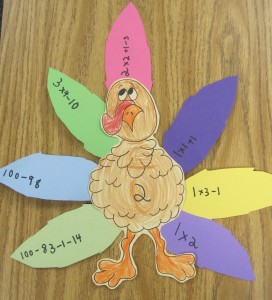 Last Thursday, everyone dressed in blue which is the national color in support of anti-bullying.

We went to the Computer Lab and played some Thanksgiving games last Thursday.  The children practiced logging in, locating a web site, using the mouse, and shutting down.  These games were good for developing problem solving and language arts skills.

The children wanted me to share this link.  Please monitor because there are some advertisements, but I have had no problems when I’ve used this site. 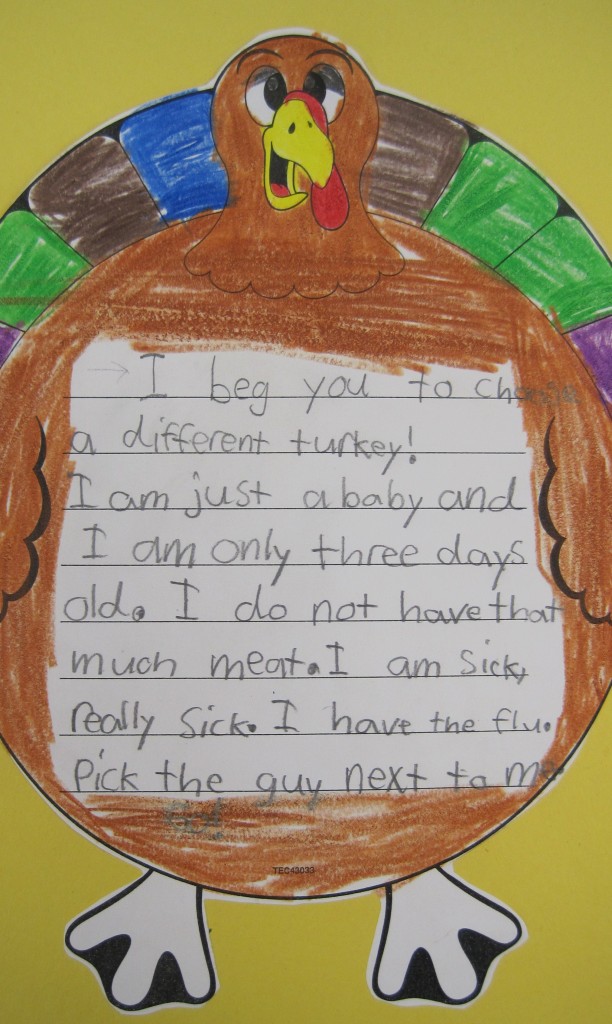 We wrote a persuasive paragraph with a topic sentence, three details, and a closing sentence.  Wow, we have learned a lot about writing!  Come and read the rest of the paragraphs across from our room.

The Power of One

This week we were privileged to take part in a presentation on bullying by two talented actors. We learned that bullying is repeated behavior that is done on purpose with the intent to harm.  There are two types of bullying: physical and verbal.  We also identified three types of bystanders- one who encourages the bully, one who just watches, and the other pretends not to see or hear anything.  At the end, we all repeated a pledge against bullying.  After we all sign the poster, it will be displayed in the hall.

We are having a door decorating contest this week with an anti-bullying theme.  We made rubbings of our shoes to go along with our theme. 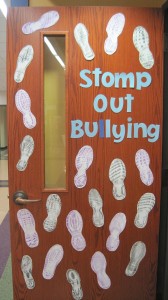 Bully Prevention Week began with “Peace Out Day”.  Students wore peace signs to show that we want a peaceful school where students are kind to one another.

We had two special readers this week.  Nicole’s big sister chose to read to our class as her “good work” award.  What an honor!  Then Aaron’s mom brought Olly and read Guinea Dog to us.  I think everyone wants a guinea pig now. 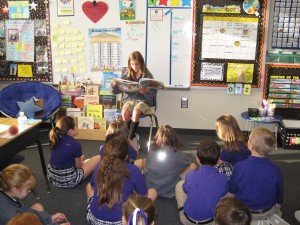 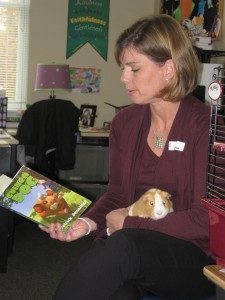